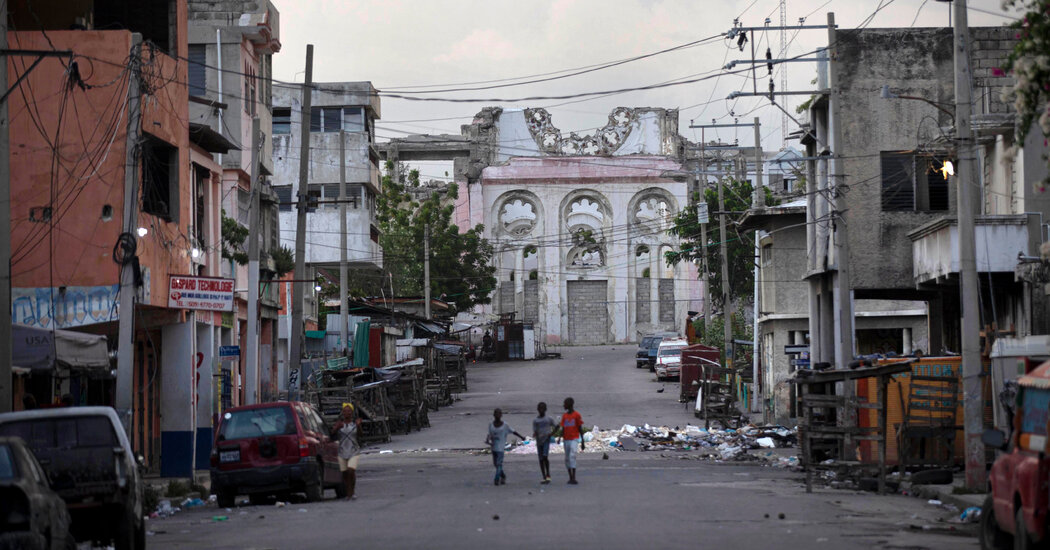 The streets of Haiti had been crowded for months with angry protesters who burned tires, stormed banks and robbed stores. Gangs, sometimes with the tacit permission of the police, have kidnapped nuns, fruit sellers and even schoolgirls for ransom.

And then on Wednesday, the country sank deeper into turmoil, when a convoy of armed men brazenly rumbled to the home of the president, Jovenel MoÃ¯se, in the middle of the night and shot him dead.

Almost every time Haitians think their situation cannot get worse, it seems the nation takes another disturbing turn and is now on the brink of a political vacuum, with no president, no parliament, or no functioning Supreme Court.

The country’s quagmire has for decades placed it at the top of the list of nations, like Afghanistan and Somalia, which have captured the world’s imaginations for their level of desperation. In the shadow of the richest country in the world, people wonder: how could this happen in Haiti?

Haiti’s troubled history runs deep into its roots as a former slave colony of France which gained independence in 1804 after defeating Napoleon’s forces, and then suffered more than two decades of a brutal dictatorship, which ended in 1986.

Then, after a powerful earthquake that devastated the country in 2010, an influx of foreign aid and peacekeepers only aggravated the woes and instability of the country.

Haiti’s failures did not happen in a vacuum; they have been aided by the international community, which has injected $ 13 billion in aid into the country over the past decade. But instead of the nation-building that money was supposed to achieve, Haiti’s institutions have hollowed out even more in recent years.

When the president let Parliament’s term expire last year, he left Haiti with 11 elected representatives – Mr. MoÃ¯se and 10 senators – for its population of 11 million, drawing strong condemnation but little repercussions from from Washington. For a year and a half, until his assassination, Mr. MoÃ¯se increasingly ruled by decree.

Haiti is less of a failed state than what one analyst has called an “aid state” – which lives by relying on billions of dollars from the international community. Foreign governments were unwilling to turn off the taps, fearing they would let Haiti fail.

But the money served as a complicated lifeline – leaving the government with little incentive to carry out the institutional reforms needed to rebuild the country, as it bets that whenever the situation gets worse, international governments will open their coffers, according to Haitian analysts and activists. .

The aid has supported the country and its leaders, providing vital services and supplies in a country in desperate need of large amounts of humanitarian aid. But it also allowed corruption, violence and political paralysis to go unchecked.

Although they deny it, Haitian politicians, including the government, have traditionally relied on gangs to influence elections in their favor and expand their political reach. In the last three years of Mr. MoÃ¯se’s tenure, more than a dozen massacres perpetrated by gangs linked to the government and police forces have killed more than 400 people in anti-government neighborhoods and displaced 1.5 million of people, yet no one was held responsible for the crimes.

When a political or human rights scandal erupts, the US government issues convictions similar to paper tigers.

Instead of embracing the long road of reforms and creating a system that works, supports Haitian civil society leaders, the United States has supported strong men and tied the nation’s fate to them. Many Haitians have repeatedly denounced US support for Mr. MoÃ¯se but said they had little power to stop him.

â€œSince 2018, we have been calling for accountability,â€ said Emmanuela Douyon, a Haitian political expert who testified before the US Congress earlier this year, urging Washington to change its foreign policy and its approach to assisting Haiti.

“We need the international community to stop imposing what it thinks is correct and instead think about the long term and stability,” Ms. Douyon said in an interview.

The United States must make aid to Haiti conditional on the cleansing and reform of the country’s institutions by its leaders, Douyon and other analysts said. And powerful figures must be held accountable for the violence and corruption that permeates all aspects of the country.

“Billions of dollars have already been spent on what is called nation-building in Haiti, which has only contributed to the erosion of the state and the politicization of these institutions,” he said. Mr Johnston said. â€œSaying now that we need to do more, well, that won’t work. “

The assassination of Mr. MoÃ¯se on Wednesday marked a new chapter in the country’s violent decade. The assassins who raided Mr. MoÃ¯se’s compound killed a president who came to power in 2016, winning the election with just around 600,000 votes. Only 18% of voters voted, and there were numerous accusations of fraud.

Still, the United States backed the unpopular and controversial leader, backing Mr. MoÃ¯se amid calls for his ouster in 2019 when it was discovered that international aid to the government had disappeared.

Mr MoÃ¯se insisted in February that he would stay one more year as president because he had been barred from holding the post for so long while accusations of electoral fraud came under scrutiny. investigation. Despite demands from civil society leaders to step down, Washington backed him up. Critics said his retention in office was unconstitutional and anger spilled over into the streets, plunging the capital Port-au-Prince into more uncertainty and violence.

Another American nation-building failure was played out thousands of miles from Haiti, Afghanistan, where the United States tried for 20 years to wrest control of the country from the Taliban before leaving the country. country. The Afghan army either abandoned its bases or surrendered en masse to the Taliban as the United States withdrew its troops. There, the international community has provided more than $ 2 trillion in aid since 2001.

The nation-building exercises that the United States and its international partners have undertaken in Haiti and around the world have done little to create functioning states, instead creating a system where dubious actors with little national support – like M. MoÃ¯se – are supported. , the easiest way to achieve short term stability.

In Afghanistan, the United States has relied on warlords and strongmen to achieve its objectives, who often politicize and undermine institutions, leaving a vacuum when they are inevitably assassinated or overthrown.

Civil society leaders in Haiti and Afghanistan have both urged the United States to help these countries strengthen their institutions and ensure the rule of law, creating democratic systems that outlast any political leader. and ensure long-term stability.

With continued support from the United States, Mr. MoÃ¯se had become increasingly autocratic, passing an anti-terrorism law late last year so broad it could be used against his opposition.

Earlier this year, he said he would draft a new constitution, giving broad powers to the military and allowing future presidents to run for a second consecutive term. He has scheduled a referendum on the constitution and a national election for September, despite warnings that holding an election amid so much violence would suppress voter turnout and bring to power the same politicians who helped provoke the struggles. from Haiti. Yet the United States supported Mr. MoÃ¯se’s plans.

“It is difficult to see the present moment as an opportunity because it will probably create more chaos,” said Alexandra Filippova, senior lawyer at the Institute for Justice and Democracy in Haiti, an organization that provides legal representation to victims. of human rights. abuses.