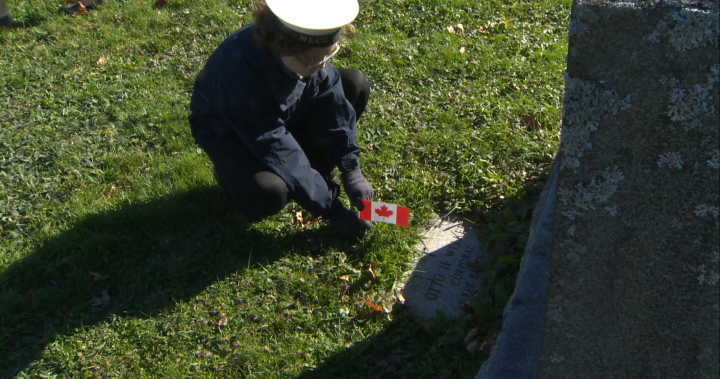 Cadets gathered in Moncton on Saturday afternoon to honor those who came ahead of the Remembrance Day ceremonies to be held next week.

Members of Moncton’s 193 Codiac Navel League cadets and 560 Army cadets attended the event at Elmwood Cemetery, which has the largest veterans’ grave site in Moncton.

According to Elmwood Cemetery Chairman Ian Gunn, the day was designed for its historical value, pride in being Canadian and respect for those who made the ultimate sacrifice.

Many cadets were between the ages of nine and 12, and it was largely their first time in public in their uniforms, primarily due to the COVID-19 pandemic. Saturday’s ceremony also marked their first postponement of the event.

One by one the cadets went from headstone to headstone removing leaves and dirt from numerous flat stones, then placed nearly 300 Canadian flags on the field throughout the afternoon.

Lt. Ian Harris, who oversaw the group, said doing an event like this creates an opportunity for the next generation of cadets to learn how to honor veterans.

The group said it hopes to start again next year with a partnership with local veterans to honor those who have fallen.