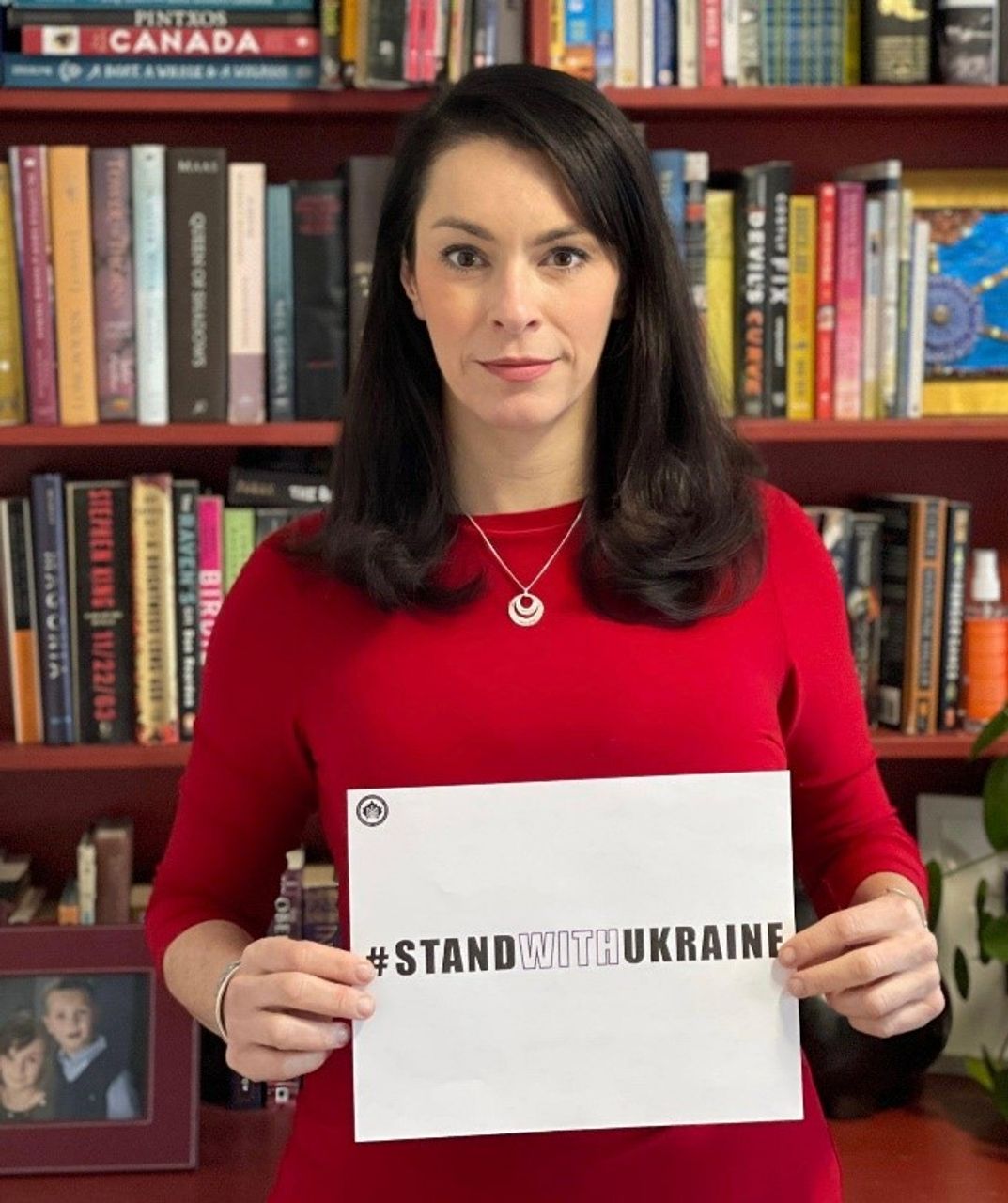 The union-backed New Democratic Party (NDP) reacted to Ottawa’s decision to allow the return to Russia of turbines essential to the operation of the Nord Stream 1 gas pipeline, and therefore the supply of natural gas to the Western Europe, accusing the liberal government of appeasing Vladimir Putin and Russian aggression. In doing so, Canada’s social democrats made common cause with the right-wing conservative opposition and the openly far-right forces of the Ukrainian Canadian Congress (UCC).

The turbines normally propel 100,000 cubic meters of natural gas per minute through the last pipeline supplying Germany with 30% and France with 20% of their natural gas. Complex moving parts require regular maintenance, which global companies such as the German multinational Siemens, the manufacturer of the turbine, allocate on a global scale. The service contract was awarded to the Canadian division of Siemens in Montreal.

But in Canada, the turbines are now falling under the historically unprecedented sanctions regime that the NATO powers have imposed on Russia with the wholehearted endorsement of the entire Canadian political establishment, including the NDP. These sanctions are ostensibly in response to Russia’s “unprovoked” invasion of Ukraine. In reality, the United States, with the support of Canada, Germany and the other Western imperialist powers, has long planned and instigated war with Moscow to complete its campaign to turn Ukraine into a geostrategic vassal and economically, and to destroy Russia economically, in preparation for its break-up and submission to the imperialist powers.

The right-wing nationalist regime in Kyiv, backed by the far-right UCC, demanded that Canada seize the turbines as sanctioned goods and refuse to export them to Germany. They claimed that Putin would be encouraged to demand further exemptions from the savage sanctions regime engineered by Washington and its imperialist allies. The NDP has joined this warmongering campaign with flying colors.

Employing the strident pro-war rhetoric that corporate media and the Trudeau government have uttered relentlessly over the past few months to justify Canada’s aggressive role in NATO’s war on Russia, the NDP spokesperson Foreign Affairs, Heather McPherson, complained: “It is shocking and disappointing that the Liberal government has decided to allow the Nord Stream 1 turbines to be sent to Germany and returned to Russia. This decision goes against the sanctions that Canada imposed on Russia in response to the illegal invasion and genocide in Ukraine.

The NDP, which has supported Canada’s participation in a long series of unlawful US-led wars of aggression over the past three decades, has spearheaded the Canadian ruling elite’s hysterical campaign to denounce Russia’s invasion of Ukraine as “genocide”. Although the New Democrats have propagated in favor of the bombing of Yugoslavia, the neo-colonial occupation of Afghanistan, the NATO regime change war against Libya and the war instigated by the United States in Syria, which has collectively killed hundreds of thousands and driven millions from their homes, McPherson believes she has a right to judge Russia’s invasion, which has killed an estimated 5,000 civilians according to international estimates, as a “genocide” – which is comparable to the extermination of European Jewry by the Nazis.

Additionally, McPherson and the NDP are sounding the “genocide” cry hand-in-hand with the far-right UCC, the political descendants of Ukrainian fascists like Stepan Bandera who collaborated with the Nazis in Europe’s most horrific genocide. history of mankind during the world war. II. “New Democrats support the request of the Congress of Ukrainian Canadians to immediately convene the House of Commons Foreign Affairs Committee to discuss the federal government’s decision,” McPherson roared in his statement condemning the turbine decision.

When the committee was convened, McPherson rushed to introduce a resolution, which won cross-party support after a minor amendment, aimed at providing a public platform for the most belligerent supporters of the reckless escalation of the war in Eastern Europe. Besides calling on government ministers to explain why they waived sanctions to allow the repaired turbines to return, the only other witnesses the NDP resolution called for were UCC officials and the Ukrainian ambassador to Canada.

The Trudeau government’s decision to approve the return of wind turbines to Russia via Germany was explicitly welcomed by US President Joe Biden, whose administration provides tens of billions of dollars in military aid to Ukraine, and was widely requested by Berlin.

In no way does this have anything to do with diminishing Canada’s major and highly provocative role in the war with Russia. Instead, Ottawa acknowledged that failure to transfer the turbines via Germany to Russia would have crippled the NATO alliance’s ability to continue the war. As German Foreign Minister Analena Baerbock recently said, a complete cut off of Russian gas would halt the war effort as European governments would face “popular uprisings”.

The idea that the Liberal government is placating Russia is totally absurd. The Trudeau Liberals have been one of US imperialism’s most vicious attack dogs against Russia. Following the 2014 pro-Western coup in Kyiv, sponsored by the United States, Germany and Canada, and led by fascist forces, Trudeau’s Liberal government oversaw the extension and expansion of a Canadian military mission initiated by the Conservative Harper government to retrain and modernize the Ukrainian military, turning it into a NATO member in all but name. The Canadian government has been no less firm than Washington in outrightly rejecting all Russian efforts to negotiate new security guarantees necessitated by NATO’s aggressive eastward expansion.

Deputy Prime Minister and anti-Russian war hawk Chrystia Freeland, who has personal and political ties to far-right Ukrainian nationalists, led the charge among imperialist powers to impose crippling economic sanctions after the Russian invasion . And the NDP-backed Trudeau Liberals are sending more than $630 million in military aid to kyiv. They also, like the New York Times recently revealed that it has secretly deployed special forces to Ukraine, where they are helping to conduct the war on the ground with special forces from other NATO member states.

The NDP is an enthusiastic supporter of this irresponsible war policy, which is why it reached a formal agreement in March with Trudeau, just weeks after the start of the war, to keep his minority Liberal government in power until June. 2025. With its “trust-and-supply,” the NDP has pledged to support a government that wages war on Russia, massively increases military spending and applies “post-pandemic” austerity to cover the costs of the Canadian war machine and the bailout of banks and large corporations during the pandemic.

The deal was seen as critical by the NDP and its union sponsors, who backed it to the bitter end, as it aims to provide “political stability” under conditions where working class struggles for wage increases wages and better working conditions multiply rapidly. While NDP MPs ensure ‘stability’ by providing a majority for war and austerity in Parliament, unions maintain ‘stability’ in the workplace by sabotaging workers’ attempt to retaliate with industrial action , whether it’s Ontario educators, CPR railroad workers, Ontario construction or rail workers.

The NDP’s criticism of the Liberals’ decision joins not only the attacks launched by the far-right UCC, but also by the official opposition Conservative Party. The Conservatives, who are currently engaged in a leadership race in which the far right of the party increasingly exerts control over the political direction of the party, have consistently attacked the Liberal government for its alleged reluctance to send arms heavy in Ukraine. To the extent that the NDP’s demand for the Foreign Affairs Committee to condemn the Liberal government’s turbine decision materializes, it will be done in alliance with far-right demagogues like Pierre Poilievre. Poilievre gave his wholehearted support to the fascist “Freedom Convoy” to dismantle all remaining COVID-19 public health measures and push politics far to the right.

The alliance of these forces from the “left” and right of the official political spectrum is not accidental, but rooted in their common support for war and militarism abroad, austerity and evisceration of workers’ democratic rights at home. The Conservatives and the NDP have already come together to attack Trudeau over his government’s alleged refusal to confront China with enough diplomatic, economic and military aggression.

The NDP’s denunciation of the Liberals over the return of the turbines and its strong support for Canada’s leading role in the US-NATO war with Russia exposes as rubbish its empty populist protests against the same Liberal government that he simultaneously supports in Parliament. Almost daily, the NDP makes rhetorical statements calling the Liberals complicit in big business ignoring the plight of workers. NDP Leader Jagmeet Singh lays empty blame on the minority Trudeau government he helps support, demanding makeshift social reforms that the NDP knows full well will never materialize. His calls to “support working families” are dirty and dishonest. This fact is underscored by the latest example of the NDP’s reckless war campaign in the name of Canadian imperialism.