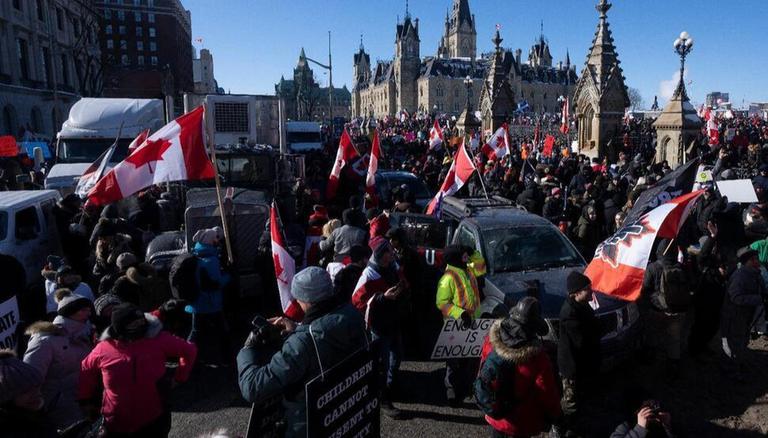 Given the anti-vaccination protests in Canada on Sunday, its Chief of the Defense Staff, General Wayne Eyre, expressed his disagreement with the ongoing protests. Speaking to the microblogging site Twitter, he raised strong objections to protesters at the National War Memorial and underscored the feelings of Canadian Army soldiers who died “for rights, including freedom of expression, but not for that”.

General Eyre said: “I am sickened to see protesters dancing at the Tomb of the Unknown Soldier and desecrating the National War Memorial. Generations of Canadians have fought and died for our rights, including free speech, but not for this. Those involved should hang their heads in shame.”

I am sickened to see protesters dancing at the Tomb of the Unknown Soldier and desecrating the National War Memorial. Generations of Canadians have fought and died for our rights, including free speech, but not this. Those involved should hang their heads in shame.

Meanwhile, Canadian Prime Minister Justin Trudeau left Ottawa on Saturday with his family to a “secret location” after security concerns erupted following escalating anti-vaccine mandate protests in the capital, reported CBC News. The decision to evacuate the Prime Minister’s residence came after the Sergeant-at-Arms of the Canadian Parliament warned that protesters could show up at official residences. The prime minister’s office declined to comment on Trudeau’s relocation, citing security concerns.

Protests against the vaccine mandate for cross-border truckers began on Saturday when the Parliamentary Protective Service estimated a gathering of nearly 10,000 protesters in Canada’s capital, Ottawa. Additionally, a convoy of truckers against the COVID-19 vaccine mandate descended on Ottawa, setting off an impending violent turn of events.

While Ottawa Police Chief Peter Sholy said on Wednesday he had been in contact with protest leaders, who claimed peaceful protests, Deputy Chief Steve Bell raised concerns about the presence of “parallel groups” that Canadian intelligence speculated.

It is pertinent to mention that Canadians launched protests against the vaccination mandate after the government launched a new requirement that truckers entering Canada must be fully immunized as of January 15. This happened after the United States imposed an identical mandate on truckers entering the country.

However, according to the Canadian Trucking Alliance’s estimate, about 15% of truckers in Canada, or about 16,000, are not fully vaccinated against COVID-19. Canadian opposition from Conservative lawmakers backed the convoy, saying the vaccine mandate has created a bottleneck for the supply chain, leaving store shelves empty across the country.